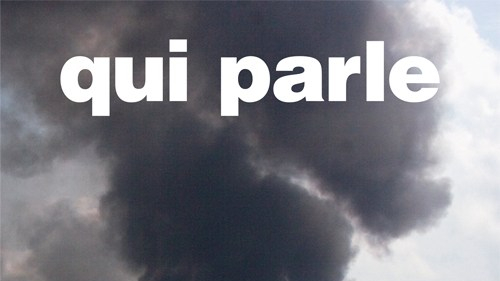 Volume 25, Nos. 1 & 2 of qui parle, now available in print through the University of Nebraska Press, and online through Project MUSE and JSTOR.

My article for this special issue: “Planetary Antigones: The Environmental Situation and the Wandering Condition.”

“Many contemporary thinkers strive to imagine what a world without human beings might be like. These thinkers include philosophers like Quentin Meillassoux conceptualizing an “ancestral” Earth predating human life or Eugene Thacker testing how philosophy may—or may not—respond to horror of a “world-without-us”; they are journalists like Alan Weisman, author of The World without Us, a book that imagines what would happen to buildings and infrastructures if human beings mysteriously vanished; or paleobiologists like Jan Zalasiewicz, well known for his work on the Anthropocene, who in The Earth after Us: What Legacy Will Humans Leave in the Rocks? wonders whether, in a very distant future, an extraterrestrial intelligence could detect on Earth geological traces of a now gone human presence.1

Why such an enthusiasm for reflections concerning the disappearance of humanity? Could these geo-philosophical investigations be but an expression, among others, of the being-toward-death that characterizes the human Dasein and its fascination with (self-)destruction? Or should we consider—a second hypothesis—this proliferation of texts navigating between speculation and fiction as an attempt to produce a non-anthropocentric thought leaning on the irrefutable reality of stellar remnants and distant futures cleared of any human subjectivity? Or do we need—a third hypothesis—to interpret this disappearance-oriented philosophy as a symptom of a specific environmental context, a historical situation under the sign of a “sixth extinction” that threatens to make humans join the dinosaurs in the cemetery of extinct species? In this article I will favor the last hypothesis, which we can call the environmental hypothesis, distinct from the strictly subjective hypothesis (concerning anxiety and fascination with death) and from the speculative-realist hypothesis (which postulates an independent and inhuman reality able to shatter anthropocentrism). Yet I will argue that the environmental mode of explanation is only one side of the planetary analysis I want to produce in this essay.

What I call the planetary is composed of two different dimensions: first, the environmental situation, that is to say, what concerns the interconnectedness of every terrestrial entity; and second, the wandering condition: here I play with the etymology of the word planet, which derives from planasthai, which means “to wander.” Whereas the environmental situation stresses the relational ontology of terrestrial-situated forms of life, the wandering dimension reveals that the singularity of each terrestrial entity leans on its unavoidable separation.”